These Solar American Board for Codes and Standards (Solar ABCs) reports address an important safety issue in the design of many U.S. photovoltaic (PV) systems. 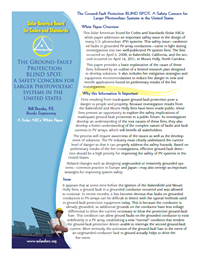 Note: This resource, and the related explanatory text below, was originally published in 2013. It is provided here as a reference document that may provide helpful historical context on how this issue was considered at that time (and may have applicability to existing systems that were installed at that time). Please be aware that these issues have since been addressed by more recent versions of related codes; as such, it is not necessarily reflective of current best practices in this area.

These Solar American Board for Codes and Standards (Solar ABCs) reports address an important safety issue in the design of many U.S. photovoltaic (PV) systems. This safety issue—undetected faults in grounded PV array conductors—came to light during investigations into two well-publicized PV system fires. The first occurred on April 5, 2008, in Bakersfield, California, and the second occurred on April 16, 2011, in Mount Holly, North Carolina.

The Solar ABCs has led a broad industry- and stakeholder-based working group to research this problem and develop effective mitigation strategies. This research first focused on developing a basic explanation of the cause of the detection blind spot. It includes results of field research conducted to characterize basic array wiring impedance properties and their effects on ground fault detection, circuit modeling, and analyses of high and low impedance faults that may occur throughout the array. It also includes a technical review of the effects of different array topologies (grounded, ungrounded, and grounded through the alternating current connection) on ground fault detection blind spots.

Learn about the trends in retrofitting we are most likely to see in the coming years that move the U.S. toward a 100% electric future.
Read More